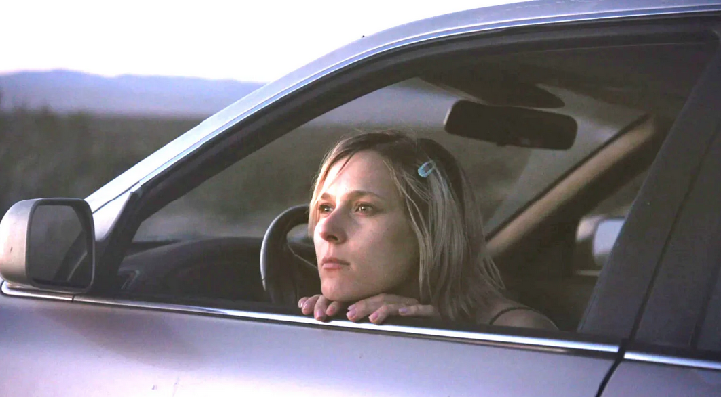 Reviewed for Shockya.com by Abe Friedtanzer

A breakup can wreak havoc on a person’s emotional state and lead to visible consequences in their physical well-being. Depending on how serious a relationship is, its dissolution can also present a monumental shift in daily operations and an enormous logistical challenge if two people live together and are now going to separate, without a clear idea of which party needs to move out and what finding somewhere new to live will look like or how long it will take. In some cases, there isn’t even a definitive conversation that takes place, and one person – or both – are forced to simply try to pick up the pieces and make sense of their new reality.

At the center of Roving Woman is Sara (Lena Góra), who has just been through a breakup and finds herself locked out of her now-ex’s home with nowhere to go. Scrambling to figure out how to move on with her life, she makes the decision to steal a car. She now has a way to move around but no destination in mind, and as she meets a number of people along her aimless journey, she becomes fixated on finding the owner of the vehicle, inventing stories that she tells others about who he might be.

This film could be described as a road movie, though many of those feature people either trying explicitly to get somewhere or traveling with someone else for the sake of getting to know them or have an experience. Sara is not doing either of those things, blazing a solitary trail that for her might have no end since she is trying to cope with the unexpected end of her relationship and the lack of stability and any sort of centering that follows. She then begins to write her own story, finding others who are eccentric and in the middle of their own bouts of self-discovery. What she shares with them is essentially all that audiences know about her, though she is an unreliable narrator since she is grappling with a life-altering event that encourages her to make things up that can pull her out of her grim reality into a more intriguing fantasy

There is a certain feel to Roving Woman that should allow anyone watching to be pulled into its world, one which is defined by uncertainty and spontaneity, where danger could be lurking around any corner but where it doesn’t seem frightening since being unpredictable is among the most efficient ways of countering threats. It’s just as easy to be intoxicated by Sara’s freewheeling road trip as it is to find it inaccessible, since there is so much that’s not known about her circumstances prior to the film, and the gut reaction that she follows isn’t one that everyone might take. Like any film that moves at a slow pace, it can be a boon or something that isn’t as positive, leading to a drop in viewer interest as little action occurs and few definitive answers are given.

Whether or not audiences are able to connect with the plot and energy of the film, there is no denying the talent of Góra, who not only stars but also serves as producer and co-screenwriter with director Michal Chmielewski. She brings Sara to life, ensuring that her lack of a backstory and her somewhat aimless nature makes her an even more enticing character, vivid in each of her scenes and often more active than what is happening in them. Roving Woman has a fitting title, one that should be inviting for those looking to travel with its protagonist and may not be entirely satisfying for those who need a destination.